I just got back from two months of writing in Florida.

I purposely didn’t sign up for an Internet package while we were there. If I needed to go online, I had to use Michelle’s laptop between dawn and the time she woke up each morning – so about 56 minutes – plus whenever she visited her grandparents.

And when you don’t own a cell phone, that leaves you with very little time to waste.

My productivity shot through the roof.

No wasted time on socials.
No scrolling news.
No idle chats.

I scored in the nineties on RescueTime. I did so much real writing that I had spare time to swim and play ping pong and go to the beach.

In eight weeks I wrote three screenplays and a 17,000-word monograph.

I’m back in Canada now.

I have the Internet.

I’m just as distracted as ever.

In fact, this very blog post is a distraction. 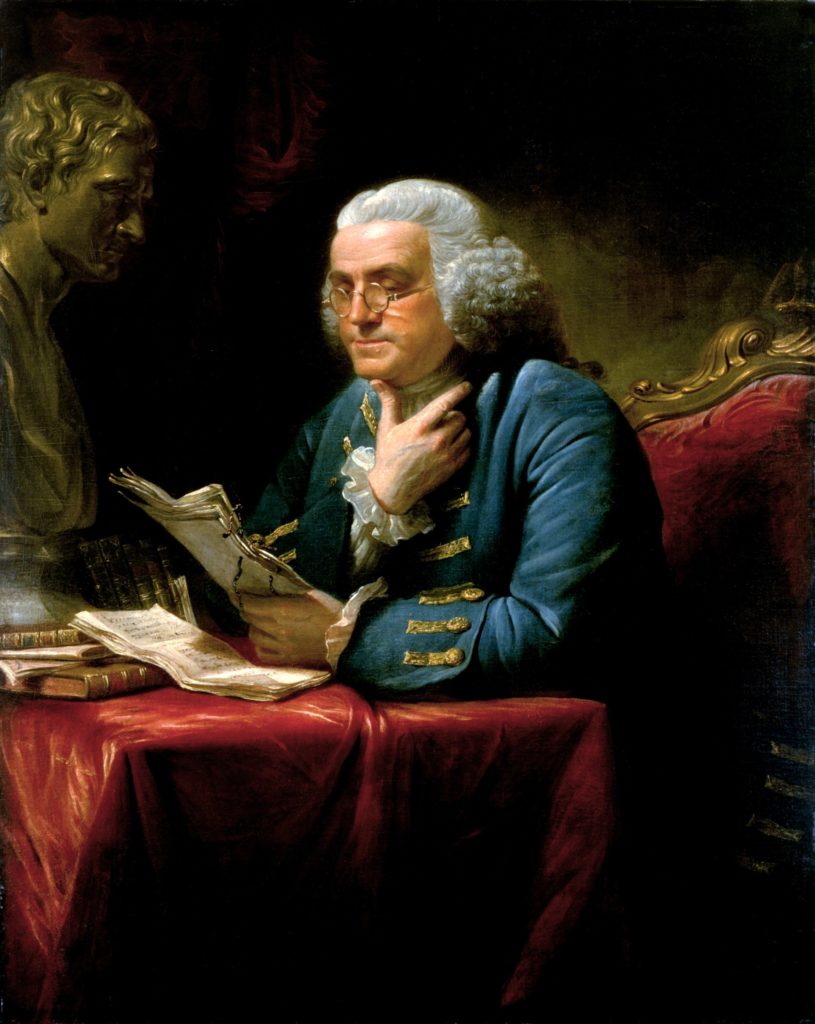 Benjamin Franklin is, quite possibly, the most interesting American of all time. Ever since I was a kid, he’s been a hero of mine. He invented the lightning rod, bifocals, and a stove that was far safer and warmer than others at the time. (When offered the commercial patent for it, he declined so that everyone could benefit, saying “As we enjoy great advantages from the inventions of others, we should be glad of an opportunity to serve others by any invention of ours, and this we should do freely and generously.”)

Franklin started a library and a university, both of which exist to this day. He launched a fire brigade, served as postmaster, and printed books, magazines, and paper money. He’s the reason why I write a new aphorism every day. Two of his books are in my list of top 60 all-time favorites. Oh, and he basically invented America.

Plus he’s on the 100 dollar bill. Where would rappers be if they couldn’t toss Benjamins?

We have much to learn from the author-politician-scientist-statesman who shapes our daily lives some three centuries after he first set foot on this continent. In honor of his birthday, here are some great thoughts from The First American:

This is huge, and clearly things haven’t changed like Franklin’s day. I only recently began to realize that the source of my discontentment is my Millenial-sized sense of entitlement. I’ve been trying to meditate constantly on two things:
A. No one owes anyone anything.
B. “The struggle ends when gratitude begins.” — Neale Donald Walsch

2. “An investment in knowledge pays the best interest.”

Early in my career, I flew across the country to intern with one of my favorite authors. I paid for my own travel and accommodations (for six months) and volunteered 20 hours per week (for free) with his organization. It was an incredibly expensive education, but it’s been paying dividends at a massive ROI ever since.

This quote also applies to books… even if books were $100 each, if each contained just one actionable piece of wisdom, it would be well worth the investment. To Do: Be sure to add a line to your budget for personal and professional development — it’s the best money you’ll spend all year. Don’t know where to start: If you only read 12 books in 2018, read these.

Early in our young married life, my wife and I had a goodbye party as we embarked on a yearlong learning journey. We described our hopes and plans to our friends in great detail, only about half of which actually came to fruition. It was a tad embarrassing, to say the least.

We still have some work to do in this category, but these days we generally try to underpromise and overdeliver. Speak little, accomplish much.

4. “A house is not a home unless it contains food and fire for the mind as well as the body.”

As a former real estate broker, I’ve watched a colossal transformation take place: of houses being turned from homes into mere assets. Where once the home was a seat of learning, hospitality, and family, now it’s just a temporary, flippable commodity.

My wife and I have spent a lot of time touring the former homes of writers like Henry Wadsworth Longfellow, Louisa May Alcott, Ralph Waldo Emerson, and William Wordsworth. These folks treated their homes like hotbeds of rebellion, seats of philosophy, and parlors where great thoughts could find root and grow.

In our own little way, we’ve tried to turn our countryside trailer home into such a place. I wish my house to be a home for the world. When people sit by firelight under starlight, free from the sounds of the city and the distraction of technology, it’s not long before their bodies and souls are equally nourished.

Several years ago, I betrayed a secret that a friend had entrusted to me in confidence. (Sorry Dan.) The look of hurt on his face crushed me, and I vowed to change. Since then, I’m proud to say that I’ve made a point of holding secrets like a vault, and letting my yes mean yes and my no mean no. My friends have started to notice. “Jay doesn’t lie,” is even a phrase I’ve heard a few times. I’d love to grown into the place where it’s 100% true, that people can inherently trust me because of my proven track record.

Whether it’s at work, on your taxes, or in your relationships, you really can’t go wrong if you become a man or woman of your word. In an age when lawyers and contracts seem to be the only way to ensure someone keeps to their promises, let’s be known as people whose handshake is good and whose word is bond.

It’s worth quoting another time-related saying by Franklin here as well: “Dost thou love life? Then do not squander time, for that is the stuff life is made of.”

Life is so short. We need to get moving. Don’t know where to start? Here are 4 words you should repeat every single day for the rest of your life.

7. “Wine is constant proof that God loves us and loves to see us happy.”

Clearly, Ben never tried a Vesper martini, but I see what he’s saying.

8. “Never leave that till tomorrow which you can do today.”

I also love the Picasso adaptation of this quote: “Only put off until tomorrow what you are willing to die having left undone.”

9. “By failing to prepare, you are preparing to fail.”

This one has rung true for my wife and I whenever we travel without planning ahead — it’s always a disaster. Better to check out hotel ratings before you have to deal with bed bugs. Better to spend a few hours sharpening the ax before chopping down that tree…

10. “ They who can give up essential liberty to obtain a little temporary safety deserve neither liberty nor safety.”

Freedom costs. America would stop going to war in a second if we brought back rationing. No more Oreos? No more war!

As our nations become controlled by the corporate state, and mass surveillance and digital tracking take over our lives, this will be an increasingly important conversation to have.

I don’t know about the rest of the world, but we Canadians have already gotten rid of pennies, so this one doesn’t apply to us, right?

This Franklin quote is all the more true when you realize that every penny you spend is an after-tax penny. Most possessions are profoundly frivolous and truly temporary, and you have to spend a lot of life to acquire them. Almost everything is too expensive for the person who values their time.

This is similar to Henry David Thoreau’s mournful thought: “How vain it is to sit down to write when you have not stood up to live.” No matter your chosen line of work, the key is to live a life that contributes to the common good.

14. “Be at war with your vices, at peace with your neighbors, and let every new year find you a better man.”

It’s never too late for New Year’s Resolutions! (<Take a peek at some of the 68 goals I made for this coming year.)

15. “It is the first responsibility of every citizen to question authority.”

This is huge. Whenever a politician opens their mouth, ask yourself “who profits?” Also: read Civil Disobedience by Henry David Thoreau.

16. “I have never entered into any controversy in defense of my philosophical opinions; I leave them to take their chance in the world. If they are right, truth and experience will support them; if wrong, they ought to be refuted and rejected. Disputes are apt to sour one’s temper and disturb one’s quiet.”

This idea is becoming more and more useful to me as various political parties and their corporate backers work our nations into feeding frenzies. Debating politics is a massive waste of your time. Just say your piece and get back to work. It’s hard not to defend your position, but kill your ego and let it lay. If you are right, time will tell. If you are wrong, you’ll be glad you didn’t waste air defending a dumb idea. Besides: when it comes to politics, no one is listening anyway.

17. “Hide not your talents. They for use were made. What’s a sundial in the shade?”

We live in a moment of incredible opportunity. For a brief interval, the forces that have constrained society seem to be loosening their grip, giving rise to a generation of artists, entrepreneurs, and leaders who are remaking the world in short order. Hopefully we create a world that’s wise, generous, joyous, compassionate, grace-filled, humble, and enviro-economically sustainable. In order to do so, each of us is going to have to bring our best selves to the table. In the words of Mr. Franklin: “To succeed, jump as quickly at opportunities as you do at conclusions.”

Benjamin Franklin was a highly effective individual. Want to start producing exponentially better work? Check out The Effectiveness Equation, my free, short, highly-actionable eBook on how to create your greatest work ever.