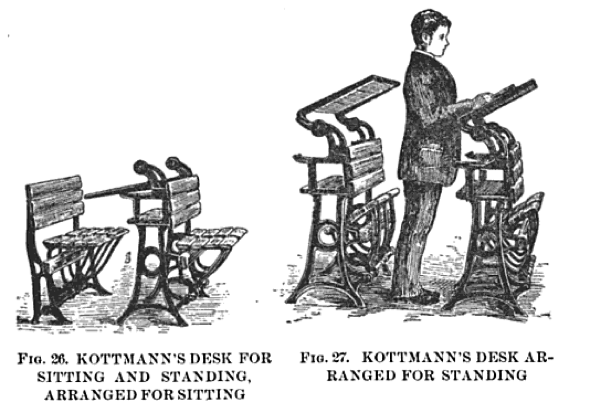 I wrote my first (now-published) book in just 3.5 weeks. It was 113,000 words, accomplished in 12–14 hours marathon sessions at a tiny desk in a Boston attic. In the end, my left butt cheek seized and I had to walk it off for days.

It was a bit of a wake-up call, to say the least. Since Apple CEO Tim Cook cautioned that “sitting is the new cancer”, I’ve made a habit of getting elevated regularly. (Yes, I’m typing these words while standing!)

Perhaps surprisingly, standing to write isn’t a new idea. For those of us who typically envision writers hunched over typewriters, the reality is that many of our favorite authors also suffered from “numb bum” and took to standing to pen their pretty prose.

Setting aside standing desk users like journalists Edward R. Murrow and Kate White, musical composers including Wagner, Hammerstein, and Brahms, and political figures such as Otto von Bismarck, Donald Rumsfeld, Oliver Wendell Holmes, Jr., and Napoleon, here are seventeen writers to give you the inspiration to stand up and write!

“The heights by great men reached and kept were not attained by sudden flight, but they, while their companions slept, were toiling upward in the night.”
— Longfellow

When I visited his incredible house in Boston, I was pleased to discover that Longfellow alternated between standing and sitting at the same desk.

“Writing and travel broaden your ass if not your mind and I like to write standing up.”
—Hemingway

“He stands in a pair of his oversized loafers on the worn skin of a lesser kudu — the typewriter and the reading board chest-high opposite him … moving only to shift weight from one foot to another.”
— George Plimpton

“Perfecting and selling your writing is a lifelong task. If you are a persistent writer, you can expect your abilities to improve with time. Success is the ability to go from failure to failure without losing your enthusiasm.”
—Churchill

“I am writing this at my standing desk, which is against the window. The window offers a pleasant prospect over the lime trees and sun-bathed hills — delightful natural scenery.”
—Nietzche, in letter to his sister

“Prowling about the rooms, sitting down, getting up, stirring the fire, looking out the window, teasing my hair, sitting down to write, writing nothing, writing something and tearing it up…”
—Dickens

“…Books all round, up to the ceiling and down to the ground; a standing desk at which he writes; and all manner of comfortable easy chairs.”
—Visitor describing Dickens’s workspace

“…I am too much harassed by a variety of correspondence together with gout and gravel, which induces me to postpone doing what I often fully intend to do, and particularly writing, where the urgent necessity of business does not seem to require its being done immediately; my sitting too much at the desk having already almost killed me…”
—Franklin

“Life can only be understood backwards but it must be lived forwards.”
—Kirkegaard

“Kierkegaard’s extravagant house-fortress with many rooms, each of them containing a standing desk, so that the wandering writer should jot down his ideas whenever they visited him.”
— Svetlana Boym

“The writer’s job is to get the main character up a tree, and then once they are up there, throw rocks at them.”
—Nabokov

“Nabokov would be back at his desk by one-thirty and work steadily until six-thirty. Normally he would have started the day in ‘the vertical position of vertebrate thought,’ standing ‘at a lovely old-fashioned lectern I have in my study. Later on, when I feel gravity nibbling at my calves, I settle down in a comfortable armchair alongside an ordinary writing desk; and finally, when gravity begins climbing up my spin, I lie down on a couch in a corner of my small study.”
— Brian Boyd

“I’m not strange, weird, off, nor crazy, my reality is just different from yours.”
—Carroll

“Standing at the upright desk he always used while writing, he managed to breathe life and laughter onto the dry leaves of paper that lay before him.”
—Biographer Morton N. Cohen

“Books are the mirrors of the soul.”
—Woolf

Woolf worked at “a desk standing about three feet six inches high with a sloping top; it was so high that she had to stand to her work.”
— Quentin Bell, nephew and biographer

“I don’t ask writers about their work habits. I really don’t care. Joyce Carol Oates says somewhere that when writers ask each other what time they start working and when they finish and how much time they take for lunch, they’re actually trying to find out, “Is he as crazy as I am?” I don’t need that question answered.”
—Roth

“Roth wakes early and, seven days a week, walks fifty yards or so to a two-room studio. The front room is outfitted with a fireplace, a desk, and a computer set up on a kind of lectern where he can write standing up, the better to preserve a bad back. ”
— David Remnick, The New Yorker

“What I had to face, the very bitter lesson that everyone who wants to write has got to learn, was that a thing may in itself be the finest piece of writing one has ever done, and yet have absolutely no place in the manuscript one hopes to publish.”
—Wolfe

“Confront the dark parts of yourself, and work to banish them with illumination and forgiveness. Your willingness to wrestle with your demons will cause your angels to sing.”
— Wilson

“Wilson wrote standing up, at a high, cluttered accounting desk. For years, an Everlast punching bag was suspended from the ceiling about two steps behind. When Wilson was in full flow and the dialogue was popping, he’d stop, pivot, throw a barrage of punches, then turn back to work. ”
— John Lahr, The Guardian

“Health is worth more than learning.”
—Jefferson

“The angle of the top, hinged at the front, can be adjusted with a ratchet stand. A bail handle pulls forward the front of the desk to reveal a flat, lined writing surface.”
—Thomas Jefferson Foundation

“Another devotee of duty and a workaholic, he composed his autobiography in long shifts, standing at his desk, often in tears, once putting in sixteen hours non-stop on the writing.”
—Frank McLynn

“I used to be embarrassed because I was just a comic-book writer while other people were building bridges or going on to medical careers. And then I began to realize: entertainment is one of the most important things in people’s lives. Without it they might go off the deep end. I feel that if you’re able to entertain people, you’re doing a good thing.”
—Lee

Did you know there’s actually a mathematical formula for consistently producing creative work? It’s called the Effectiveness Equation. You can get my short, free, highly-tactical eBook on how to radically boost your effectiveness in writing and life right here.

Feeling inspired? Enter this free giveaway for a chance to win some of the best books on writing.

If you enjoyed this story, please share this photo essay with other writers in your life.